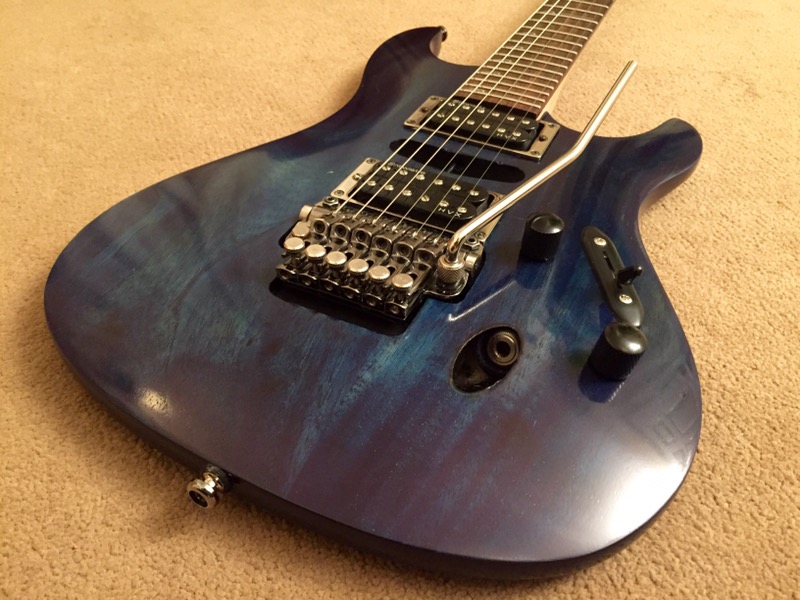 I loved the look of these Ibanez S-Series guitars in my teens, but only acquired my first one some 20 years later. You know what you’re getting with these guitars; flat wide and thin necks, perfect for shredding. The slimline body is well weighted, in that it sits nice and light, but unlike a Gibson SG for example doesn’t feel too neck heavy. 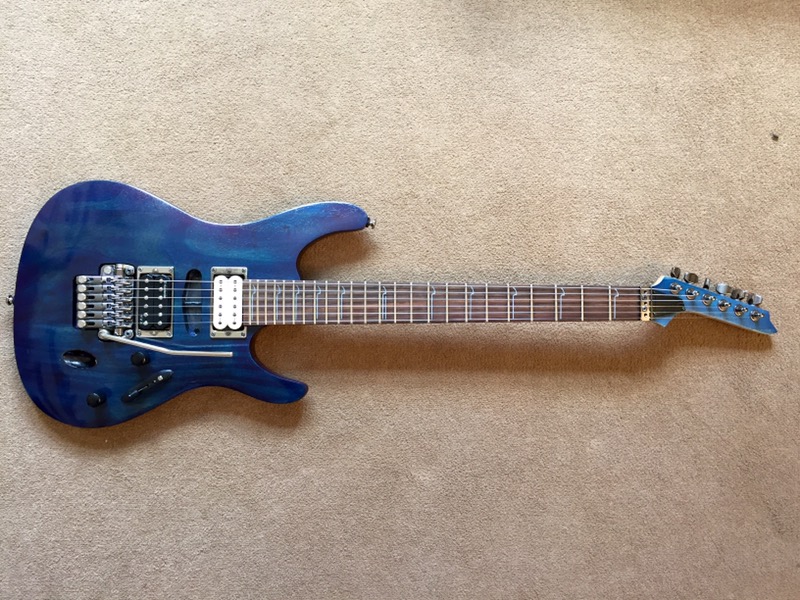 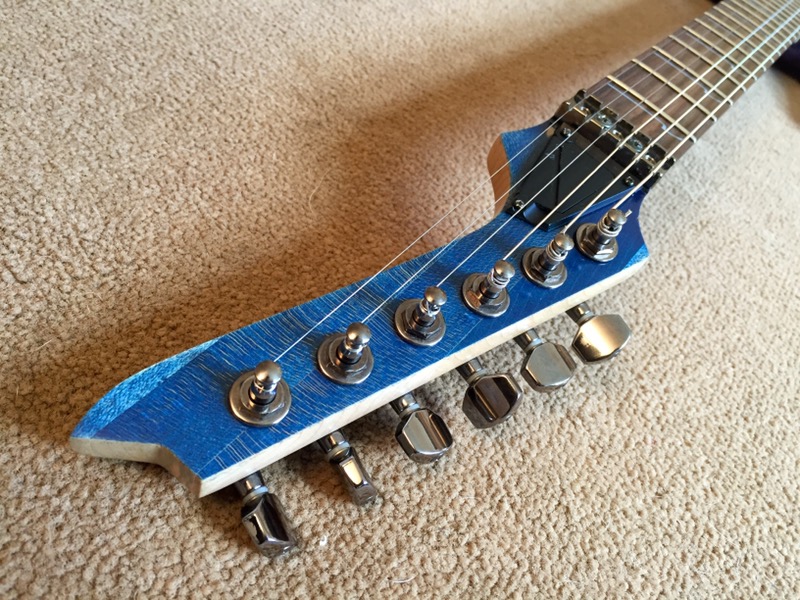 As with many a guitar I seem to come across, this S570 needed some work. A previous owner had had a go at presumably relic-ing it, to a quite unsuccessful level. 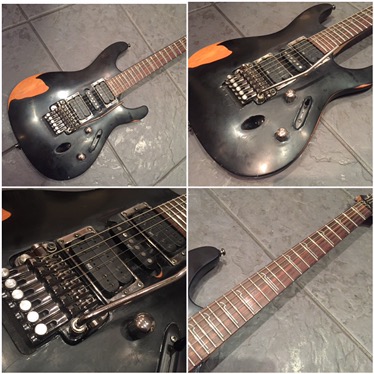 Initial impressions were good; the minimal design means it’s light and comfortable. The neck is a nice flat profile and, despite the string spacing being wider than I’m used to, legato (and lead playing in general) is effortless.

From the initial relic job it was clear this wasn’t a piece of particularly outstanding mahogany, so I went for adding subtle overcooking here and there with the gun. Later this would help give a more interesting translucent finish. 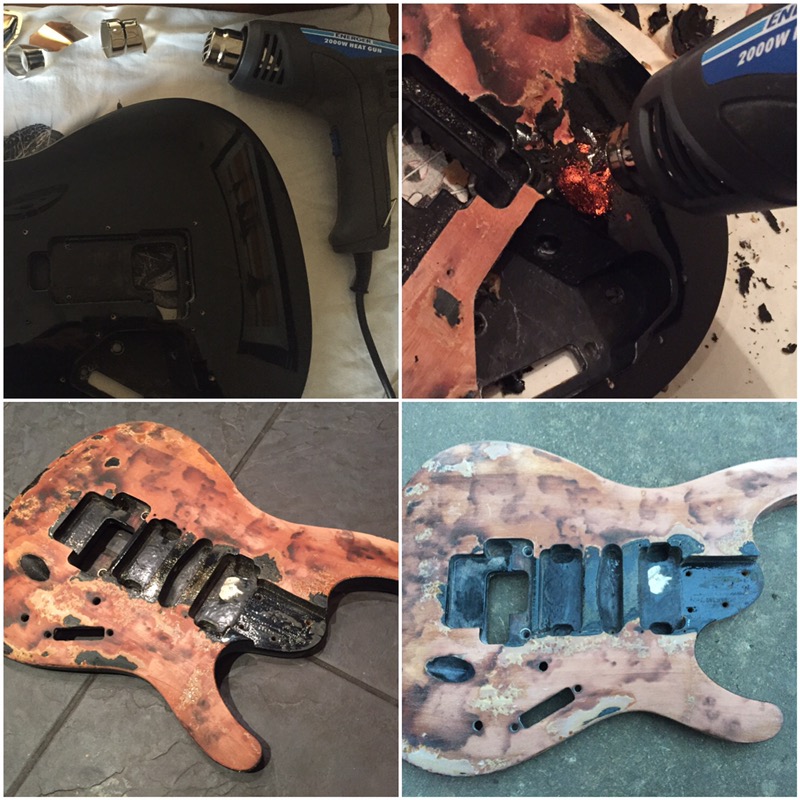 This photo is after the heat gun and one round of sanding with a blend of 40 and 80 grit paper. 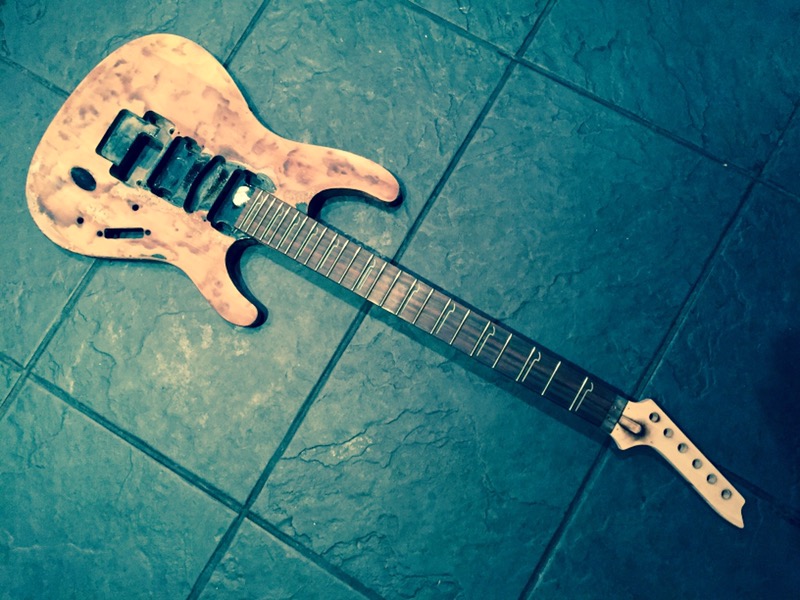 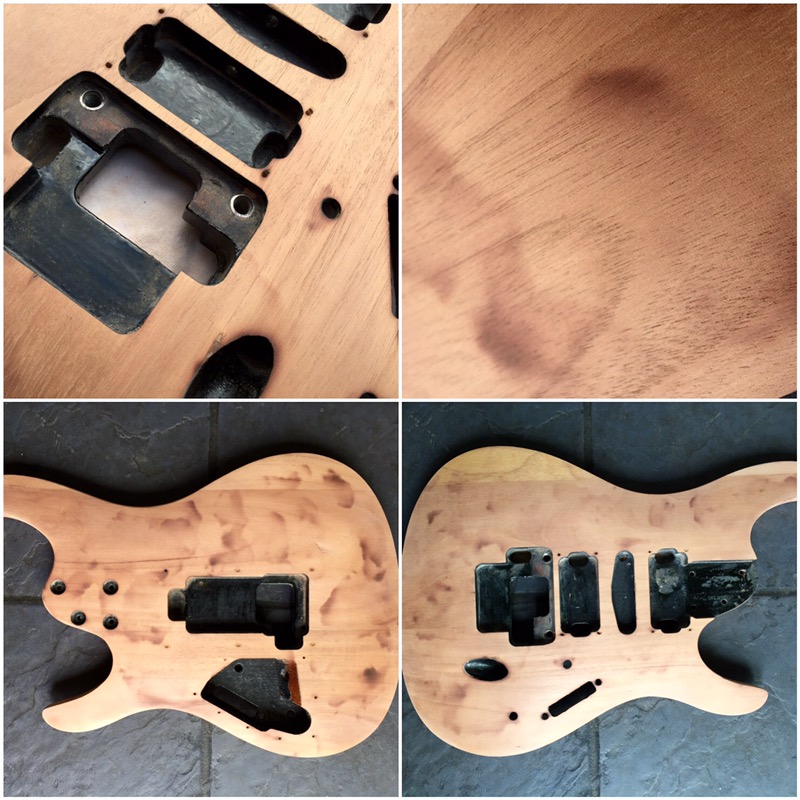 I’ve always admired the modern headstocks of guitar makers Parker and Blackmachine, and the standard Ibanez shape seemed to lend itself well to a bit of destruction.

I heat gunned the plastic veneer off in one piece. The reshaping line was carefully and technically done with a blunt pencil, ruler and a cup of tea (for the curve outline). It was cut with a basic hand jigsaw and finished by hand. The forefront of technology… 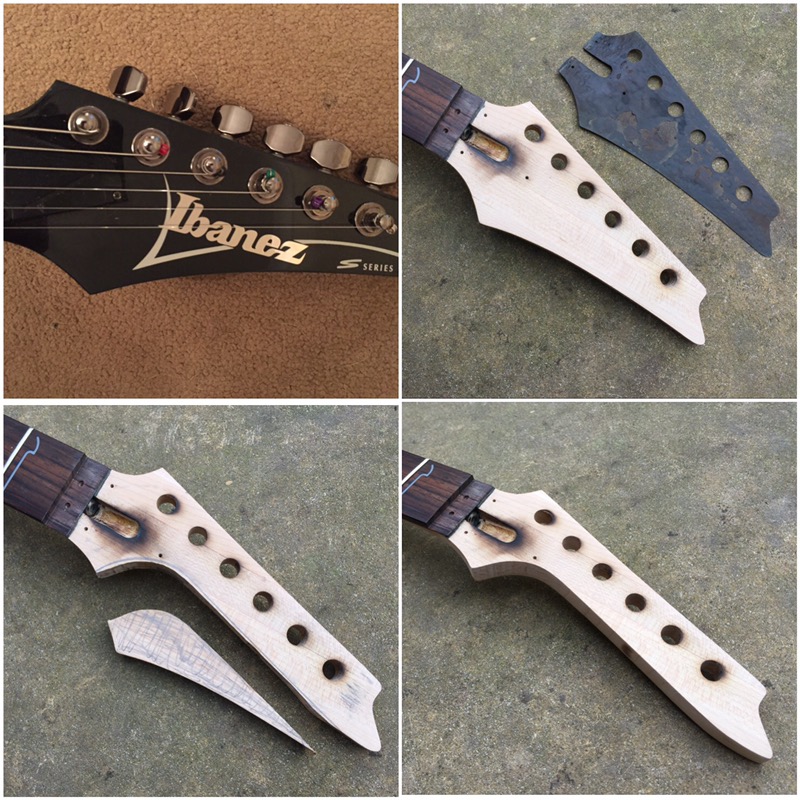 Working through the grades

This was a really laborious process with a lot of patience required. The body is cut from 3 different pieces of mahogany, all with slightly different hues and grain patterns. Getting a consistent finish was not easy.

From the bare wood I sanded up to 1200 grit and applied the first coat of dye. This was a 4:1 warm water to black stain mix. 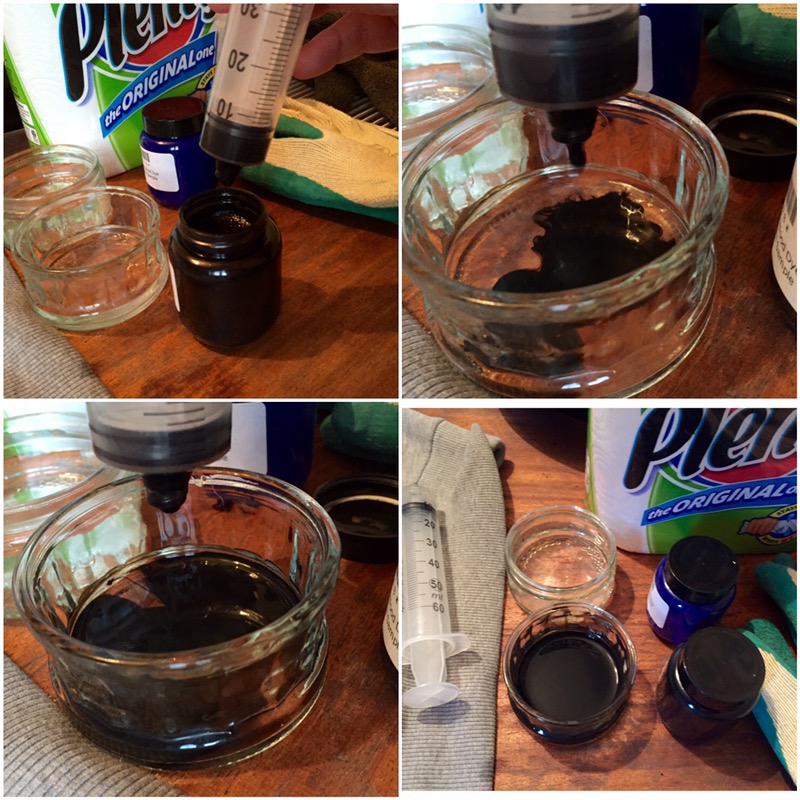 One coat of black applied and sanded back. I did wonder whether I should stop here and move to oil. The burnt mahogany look is pretty cool. 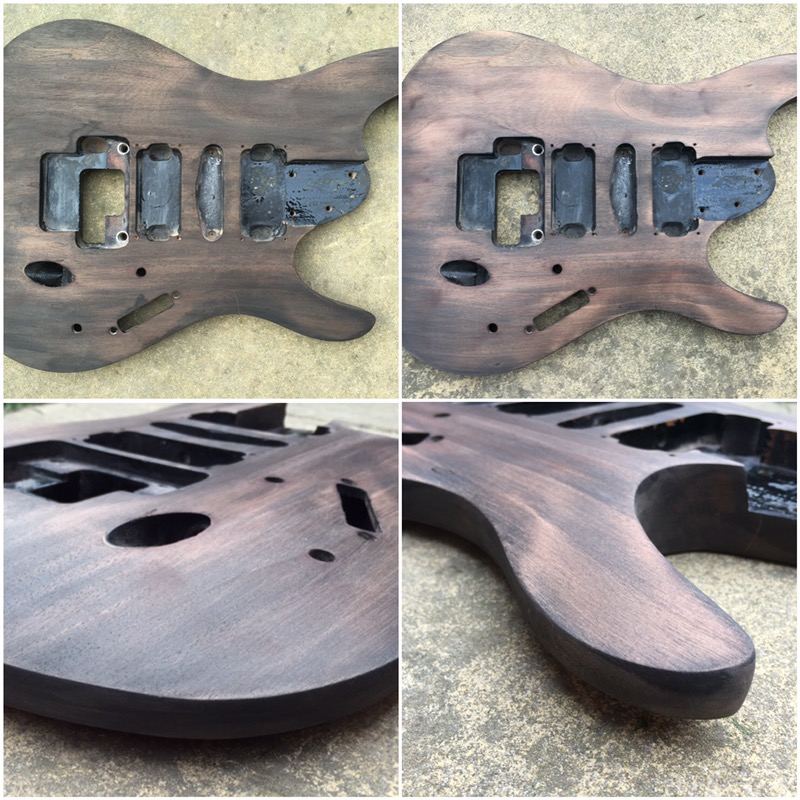 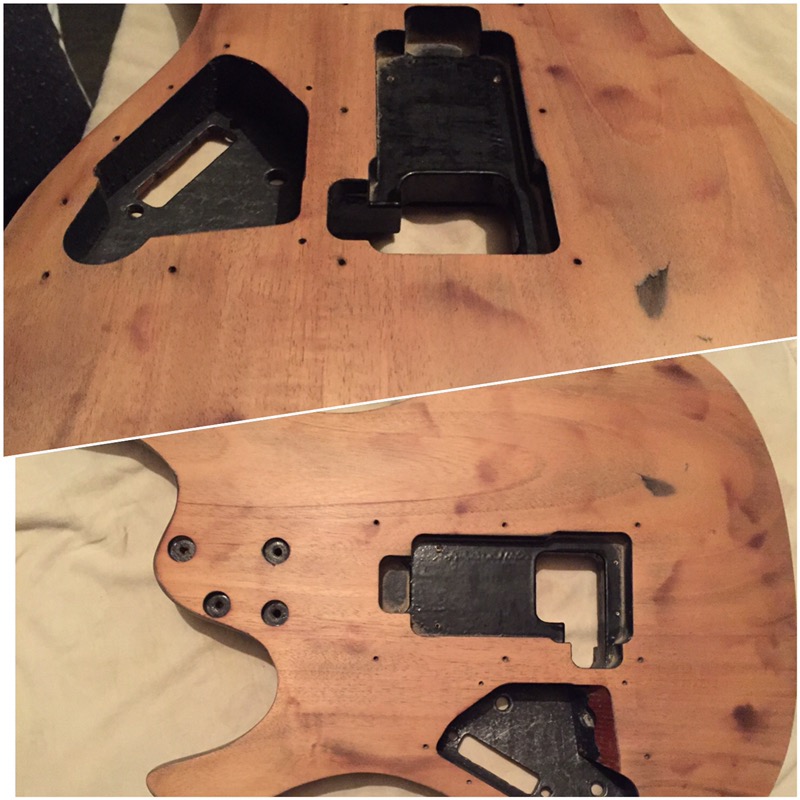 The first two coats of blue were 2:1 water to dye mix. By the third overall coat the grain was really starting to catch the colour and show some depth. It’s never going to be AAAA maple but it’s not chipboard either. 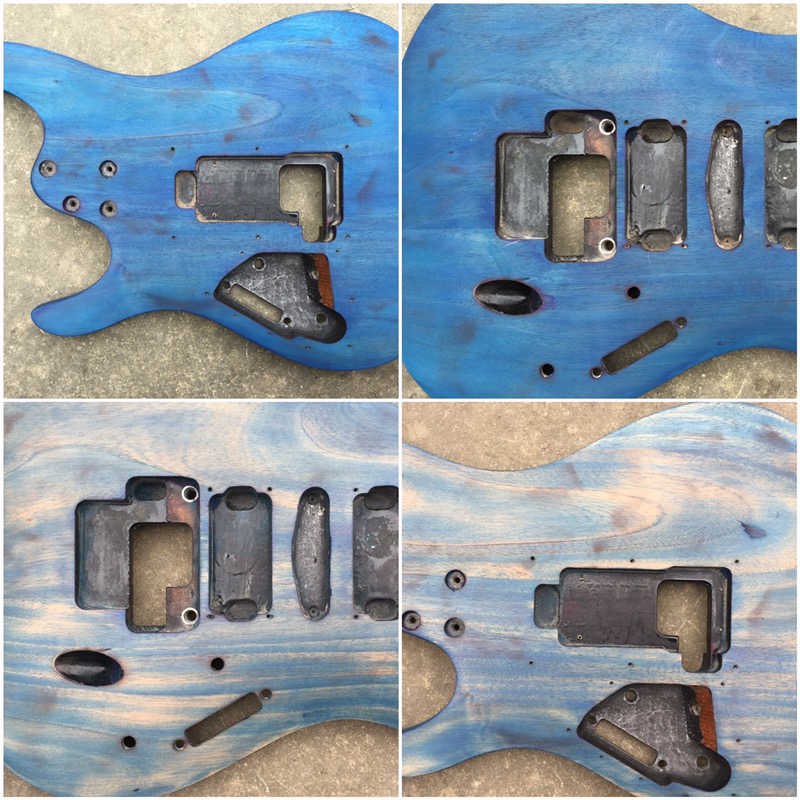 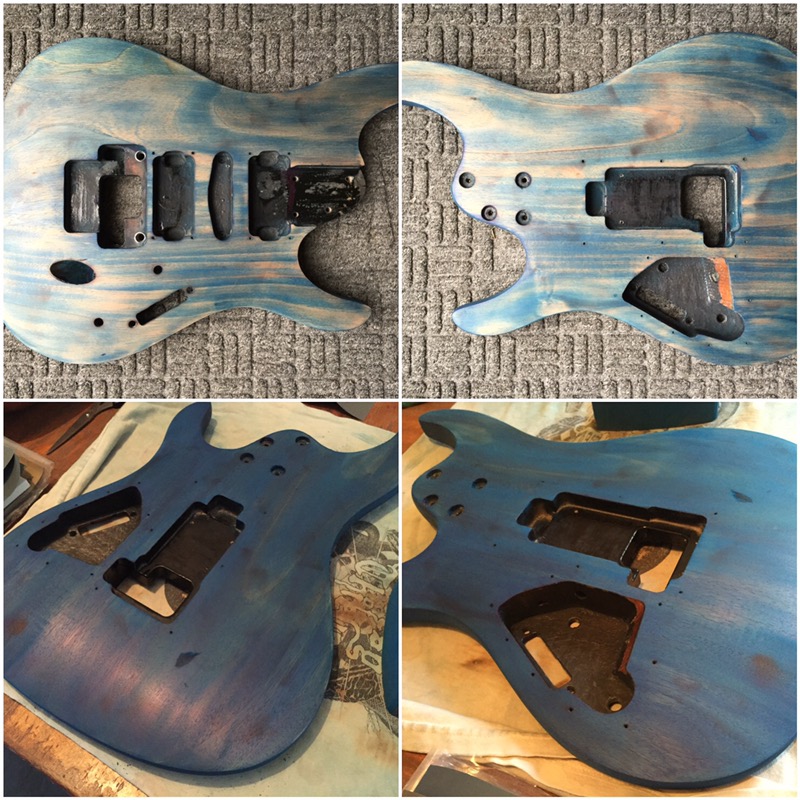 The purple flip appeared around the fourth and fifth coats. I was using the blue dye undiluted by this point, still sanding higher between each coat. 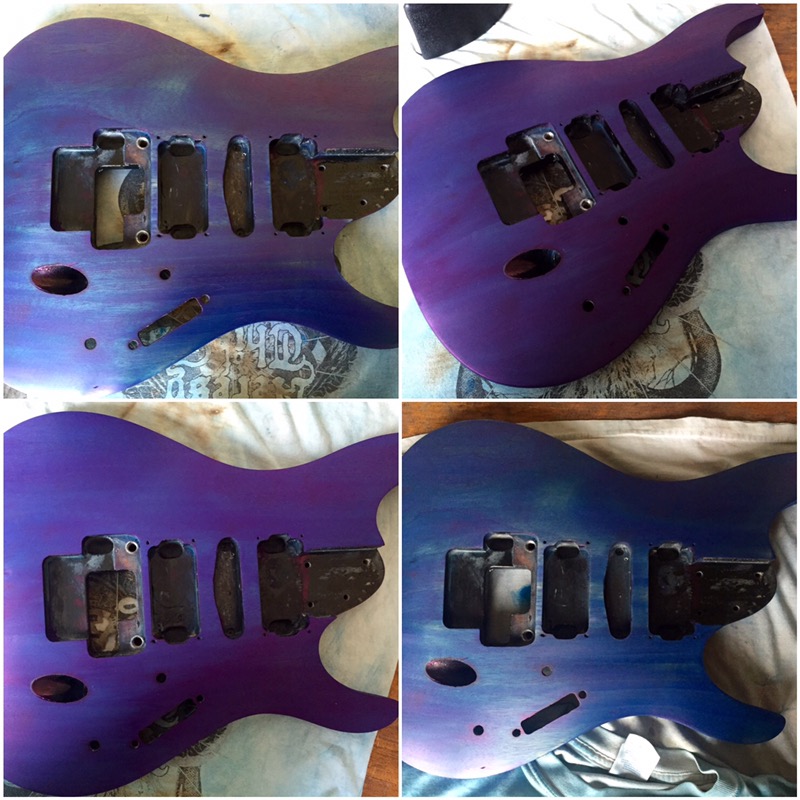 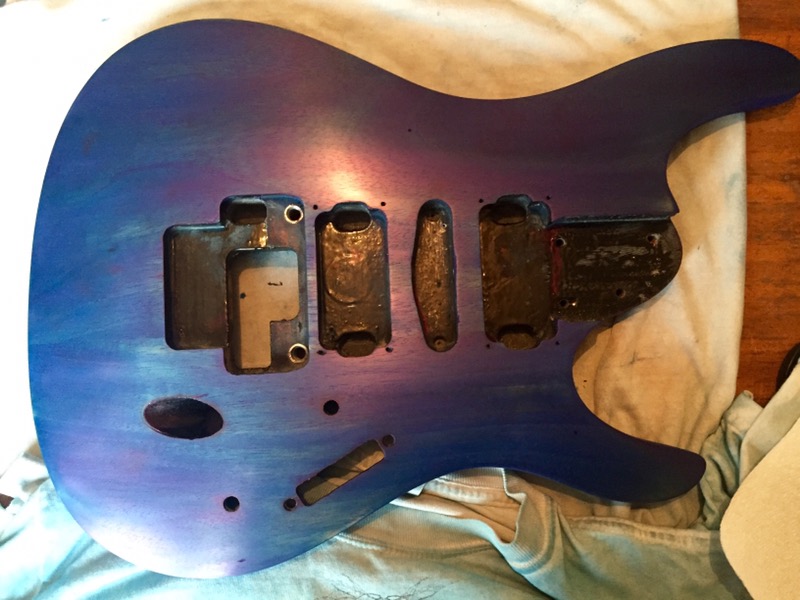 At this point in the project I experienced the saddest, most painful day of my life. Losing my four legged best friend just a fortnight short of his 15th birthday will always a tremendous heartache.

Rizzo spent many hours at my feet, listening to me play guitar, talking guitar stuff to him and no doubt boring him senseless deliberating over finishes and wiring possibilities. 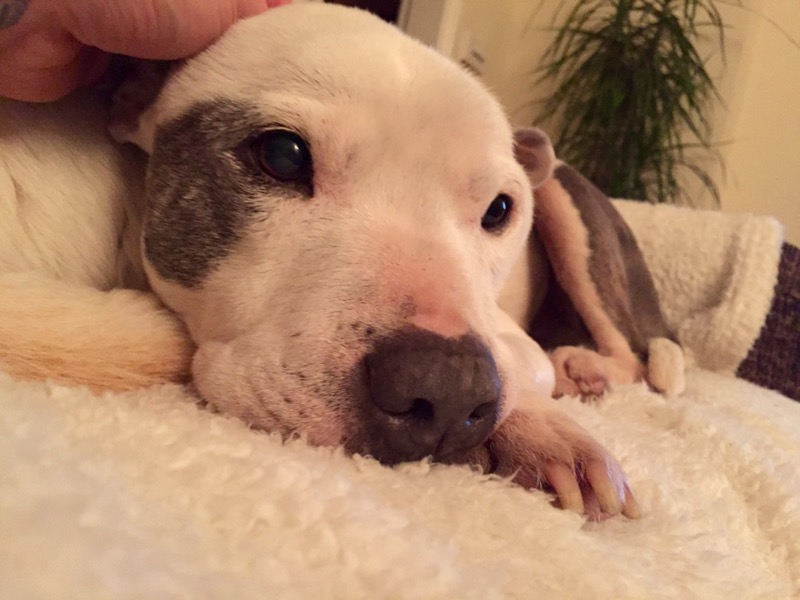 I sadly didn’t take many photos through the stages of the oil and wax, but here is the finished product. 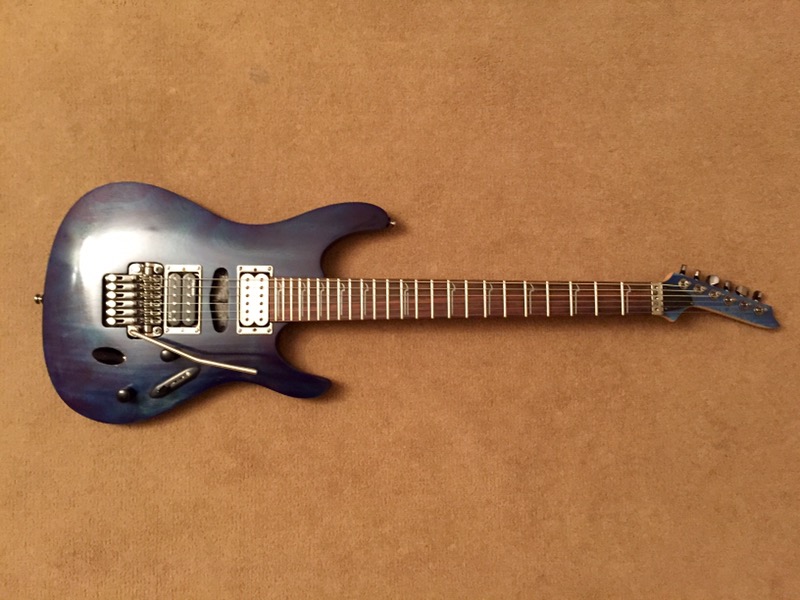 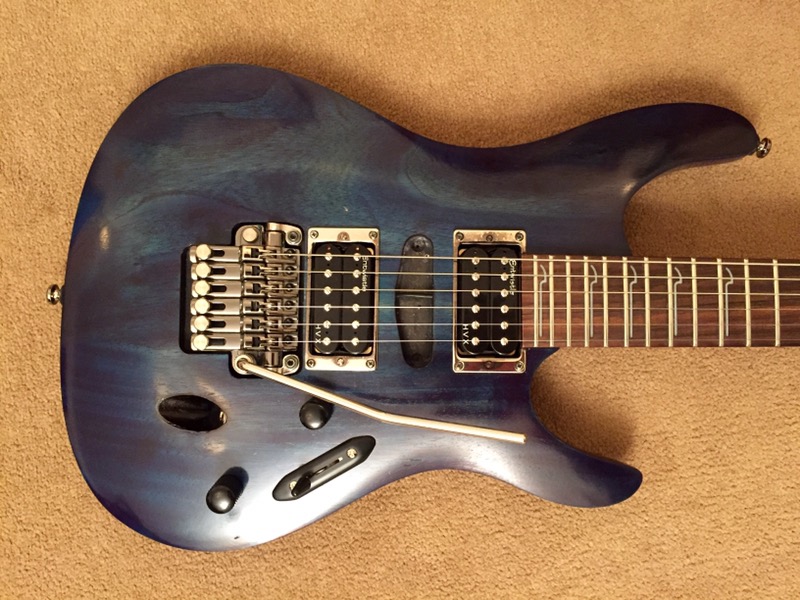 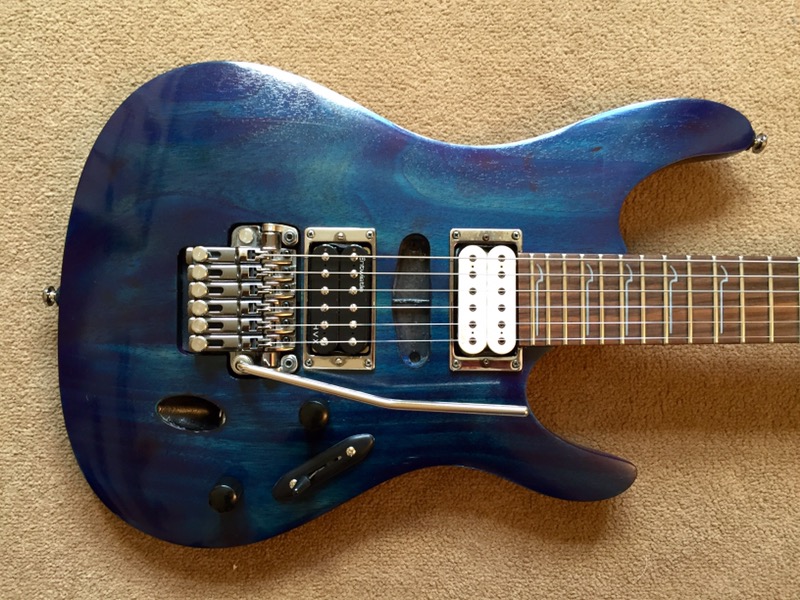 Being honest, the finish wasn’t quite as good as I would’ve liked, but my head was up my arse with losing Rizzo.

Besides which, imperfections are sometimes what makes things perfect; fuck a clinical approach. The light Danish oil and beeswax finish will age well over time, albeit quicker than a poly lacquer finish.

That being said, the colours are pleasantly translucent and the I think I made a pretty ordinary chunk of mahogany appear a damn sight easier on the eye.

I gave the frets a light stone and polish before stringing and setting up. 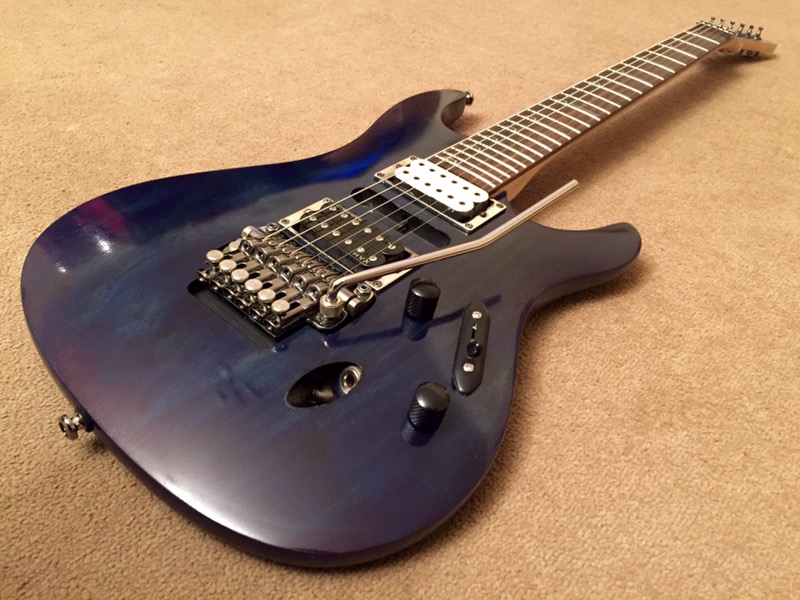 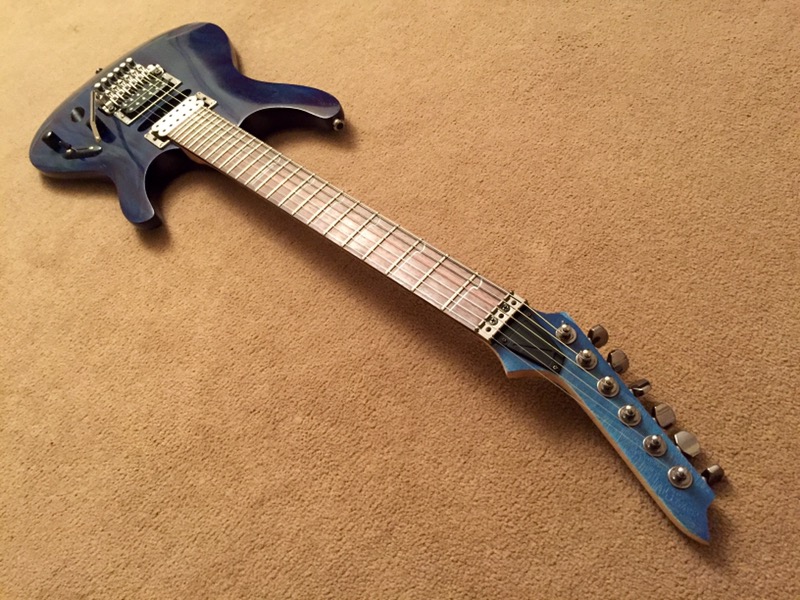 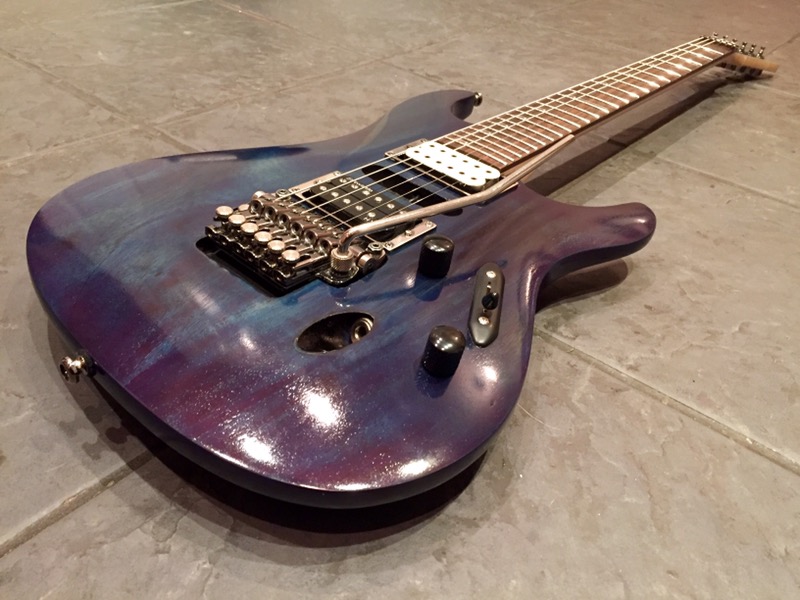 While waiting for a DiMarzio or Seymour Duncan in naturally aged white to come up for sale somewhere I got hold of a matched pair of Entwistle HVX humbuckers and stuck the bridge in the S series with the Evo.

The Entwistle was so impressive, particurly on the coil tapped option, that the Evo was quickly swapped out for the Entwistle bridge. Although I do prefer the Evo, personal taste, having the matched pair certainly made more sense on this machine.

The wiring set up is as follows;

A fairly straightforward setup, with the coil tap giving hidden varieties in the sound. Both humbuckers split over the three switch selections, so for all intents and purposes it’s got Les Paul and Telecaster like options just on the volume pot. 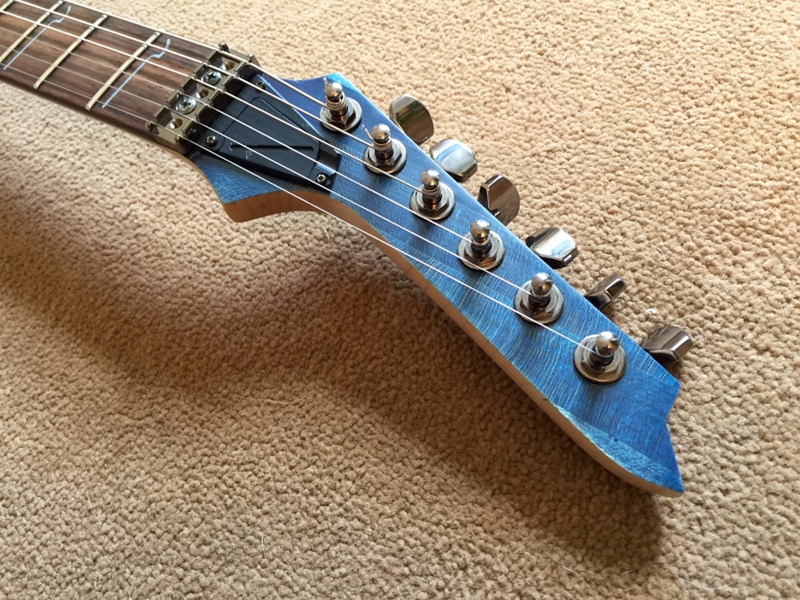 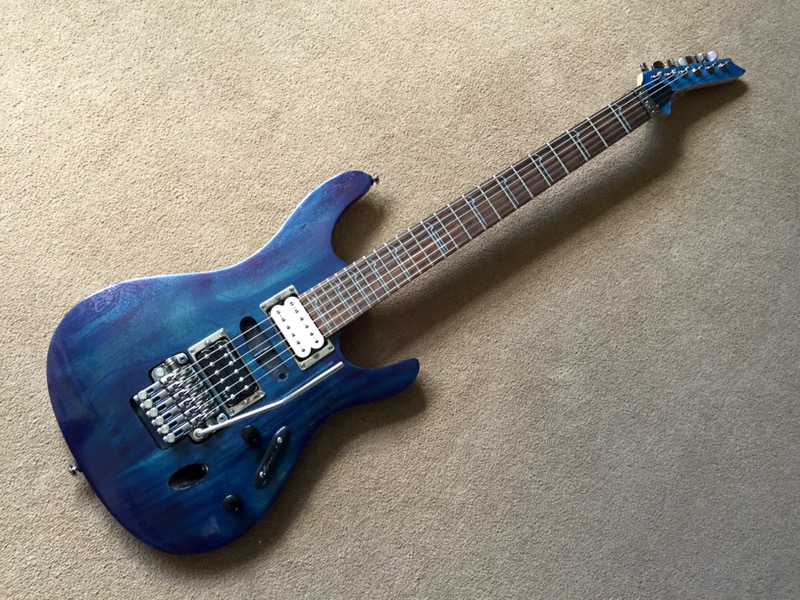 A brief video demonstration with more photos and sound clips.